Find your AEROCRAFT boat cover below: 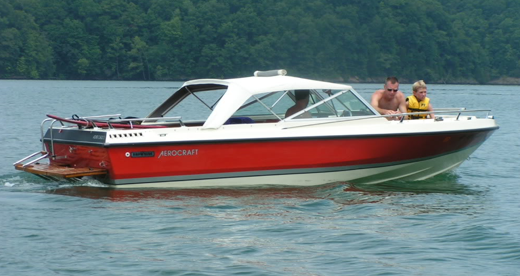 A leading post-World War II producer of aluminum, outboard-powered recreational boats, Harwill, Inc., manufacturer of Aero-Craft boats, was a boat-building firm in St. Charles, Saginaw County, Michigan, established in 1946. A. S. Brennan was president of the firm; L. B. Harkins, vice-president and general manager; D. Wiltse, secretary and sales manager; and Leon Harkins, the treasurer and purchasing agent. Among its diversified products were parachute packing tables for the U.S. Air Force in a contract awarded in about June 1951. One source reported 60 males and 15 females working for the company in 1950. The company produced aluminum boats, toboggans, pontoons and custom metal work. H. M. Robins Company of Detroit was the export management company for the firm in 1950. By 1955 the firm employed 75 males and 25 females for a workforce of 100 people. By 1959 the firm was located at 400 Water Street in St. Charles, the same address as Harwill, Inc., its parent firm. By 1960, the firm utilized Universal Sports Corporation of New York City as its export manager. Staffing had increased to 100 males and 25 females by 1960. A lower price series of 12' and 14' models were marketed as "Aero-Line" boats to distinguish them from the higher-priced Aero-Craft models. The firm apparently closed sometime after 1978