Established by John Allmand in 1965, Allmand Boats has an established history building motor boats as well as sailing vessels. Allmand Boats assembled a range of recreational watercrafts including speedy runabouts and cabin cruisers. Shutting down in 1985, new life was delivered to Allmand Boats in 2002 when the founder’s son reopened the company.

Find your ALLMAND boat cover below: 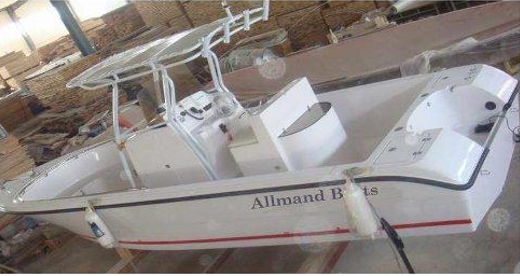 By 1990, all original founding family members had long since retired from the business. The office and executive staff needed to manage the large operation also retired. The 60,000 sf factory and assets were sold off. The son of founder John Allmand, continued building custom boats in a 15,000 s.f. shop in South Dade. The new boats were designed with fuel economy and affordability in mind. In 1996 the new design 36' high speed offshore center console was introduced at the Miami Beach Boat Show. The Allmand New Boat model was named the 36 foot Samurai. The model was an instant success, ordered by anglers, and scuba divers wherever there was the need to navigate long distances with 4 to 6 foot seas safely at high speeds. Sold from Nags Head to St Maarten.