National Boat Covers offers the widest variety of high-quality boat covers for Alweld Commercial Boats. Choose the perfect fit boat cover for your exact model and size Alweld Commercial Boat using our drop down selector menu. Our boat covers are made with waterproof heavy-duty marine grade fabrics such as Sunbrella, Sunflair, and Marinex. These are the best semi-custom fit covers on the market today. 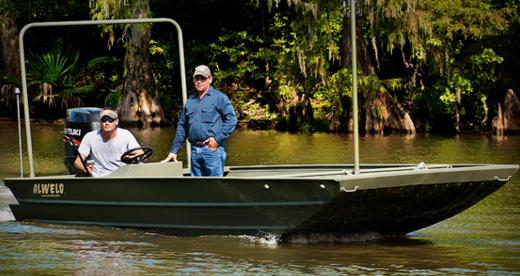 Alweld Boats was founded in 1979 by two brothers, Joe and Farrell Beck. Both came from welding backgrounds.They started out with an idea to build the toughest aluminum boat on the market, with this guiding principle: Never allow the compromise of quality for quantity. Alweld is still family owned and now in its second generation of leadership. That guiding principle, and the original philosophy of boat building are still there, better than ever. In 30 years of business, we've been true to that principle and it's reflected in the loyalty of our customers, and the boats that they've used for years.