Created in 1945, Grumman Boats was founded as manufacturer of aluminum boats and canoes. Grumman Boats line-up has expanded to include skiing, fishing and utility vessels. Existing within the Outboard Marine Corporation from 1990 to 1996, Grumman Boats was officially divided in 1998. Marathon Boat Group purchased the Grumman brand name while Lowe Industries took over the construction of their watercraft. 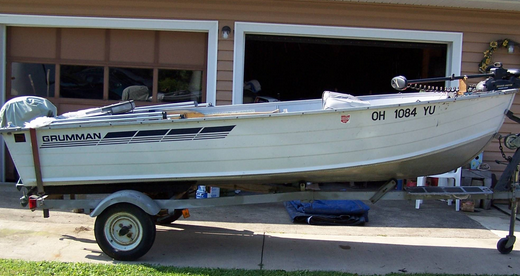 In the summer of 1944, after portaging a heavy wood and canvas canoe on a fishing trip in the Adirondack Mountains, William Hoffman, Vice President of Grumman Aircraft Engineering, had an idea: What about making a canoe from the same lightweight, stretch-formed aluminum that Grumman had used to become the single largest producer of carrier-based fighter planes during World War II? In 1945, the very first aluminum canoe, a 13-footer, was produced at the aircraft plant in Bethpage, Long Island. By the end of World War II Grumman was producing a line of 13', 15', 17', 18', 19', and 20' canoes. The plant relocated to Marathon, N.Y. in 1952.and in 1988, Grumman produced the largest aluminum boat in its history at Marathon. Designed for the Great Lakes, it measured 22' 3". In 1990 the Grumman boat and canoe division was sold to O.M.C. of Illinois, who soon purchased the DuraNautic Boat Company's tooling and assets and moved them to the Marathon Plant.