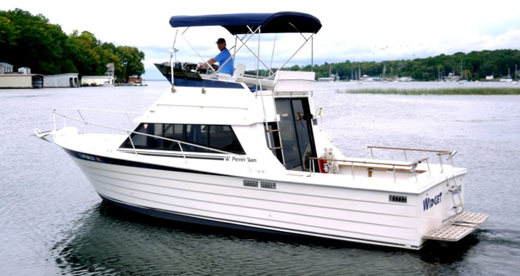 Penn Yan Boat Company, which produced a wide range of wooden and fiberglass powerboats, sailboats, canoes and rowboats, was founded in 1921 by German-native Charles A. Herrman. It derived its name from the location of its headquarters, Penn Yan, New York. In 1936, Penn Yan introduced its "Car Top" outboard boat. The Car Top, which Penn Yan marketed as being easily lifted by two people, was designed to be light and narrow enough to fit on top of most cars of that era. Among other innovations, Penn Yan was known for its patented "Tunnel Drive" concept, whereby a cavity was molded into the bottom of the boat's hull, partially enclosing the propeller and drive shaft. The tunnel drive system provided better boat speed and stability. The company was sold to new owners in 1979 and finally ceased operations in 2001.The "Penn Yan" trademark has since been cancelled by the United States Patent & Trademark Office. The former Penn Yan boat works property is abandoned and has fallen into ruin. Many of the buildings have collapsed, and the grounds are full of debris. There is a plan to clean up and redevelop the site into residential property. Recently a new company, Penn Yan Boat Company, has come into being near Penn Yan. They offer replacement parts and accessories for Penn Yan boats, as well as assisting the sale of old Penn Yan boats.