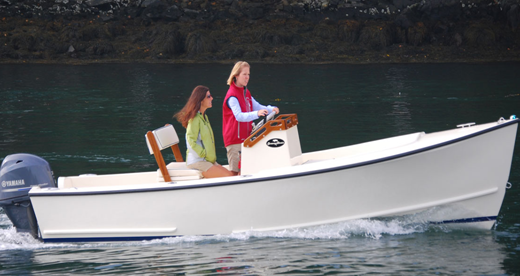 Seaway Boats was founded by Harry Farmer back in the 1970’s.  They built up quite a dealer network and their downeast-style boats were distributed along the entire East coast.  Seaway and Harry took a hiatus thru most of the 90’s and reappeared in 2001 working out of a new facility in Oxford, ME. Seaways re-emergence started out with the redesigned 21’ hard chine hull and quickly worked up to their current line up of 18’ to 24’ models.  With their downeast flare, wide beam and handsome woodwork Seaway was back.  Unfortunately the nationwide recession in 2008/2009 which affected so many also hit Seaway. In sailed Eastern Boats, Inc. who recognized Seaway as a competitor and as a boat line that represented the same values as theirs while offering different models and features. With the purchase the Seaway molds were moved from Oxford, ME to the Milton, NH facility. Eastern brings to Seaway stability, experience, and buying power. Seaway Boats and their downeast tradition will be around a long time serving customers both new and old.